Use this Real-Life Lens Lesson to help students dive deep into Shakespeare’s A Midsummer Night's Dream and examine and engage with the play through the lens of dreams and reality.

Poetic Meter and Social Class in A Midsummer Night’s Dream

Students will identify poetic meter in William Shakespeare’s A Midsummer Night’s Dream and explain how and to what effect Shakespeare uses poetic meter to create contrast between social classes and to create meaning in the text.

In this lesson, students will compare scenes in the text of A Midsummer Night’s Dream with scenes in the 1999 film by director Michael Hoffman to better understand how themes can be interpreted differently.

Students will use this worksheet to examine the text in terms of order and chaos and summarize how the plot’s key action falls into these two categories.

Students will use this worksheet to analyze how the theme of dreams relates to other major themes in the play, including love, marriage, gender, and friendship.

Students will use this worksheet to locate and examine important quotes from the play in which characters discuss dreams.

Students will use this worksheet to briefly review the dramatic conventions of comedy and tragedy as outlined in Aristotle's Poetics and to examine A Midsummer Night’s Dream for examples of each convention.

Students will use this worksheet to analyze doubling in A Midsummer Night’s Dream by comparing and contrasting humans and fairies and Athens and the fairy world.

Students will use this worksheet to explore how Shakespeare uses wordplay, particularly puns, to add meaning and humor to A Midsummer Night’s Dream.

Dreams and Dreaming: The Search for Understanding

This handout gives students important background information on dreams and dreaming in the sixteenth century and how the topic continues to be explored today.

In this lesson, students will compare scenes in the text of A Midsummer Night’s Dream with scenes in the 1999 film by director Michael Hoffman to better understand how themes are expressed in the play and the film.

When directors create an adaptation of a movie, they have many choices to make beyond just casting and scenery. They might consider questions such as: Which virtues or flaws of a character could be emphasized for effect through imagery or dialogue? How does one create emotional depth in a character through visuals and sound? What elements can be changed to highlight and promote certain themes over others? A director’s answers to these questions can determine whether the film is a fresh, engaging adaptation or one that falls flat.

For this lesson, students will first review the key themes of A Midsummer Night’s Dream. Then, they will watch Michael Hoffman’s 1999 film. While watching the film, students will look closely for differences in the ways Hoffman expresses the play’s major themes by comparing any differences in character, dialogue, imagery, setting, and other devices in each of the scenes in the movie with the same scene in the text.

Get the worksheets for this lesson (plus much more!) in the printed SparkTeach guide for A Midsummer Night's Dream.

1. Students will review and briefly discuss the key themes in A Midsummer Night’s Dream.

2. Students will identify the different ways the play’s key themes are expressed in Hoffman’s A Midsummer Night’s Dream versus in the text.

This activity is designed to be completed after students have read all of A Midsummer Night’s Dream by William Shakespeare.

1. Pass out the worksheet Themes in Hoffman’s Film.

2. As a class, review the major themes of the play listed in the first column of the chart. Ask students which plot points they can recall that reflect these themes. Then, in the second column, instruct students to jot down different scenes from the text that deal with each theme. They can look through their text as necessary. For now, students should only note the act and scene from the text in which this theme is explored. They will record additional details here after watching the film.

3. Review the sample answer in the first row with students to prepare them to complete the chart as they watch. Then present Hoffman’s film to the class. Remind students to pay close attention to the scenes they recorded and how these scenes are presented in the movie. Have them record any differences in the scenes in the film compared to the text in the second and third columns of the chart.

4. Instruct students to jot down any other general differences they notice between the text and film on the other side of their worksheet.

5. After students have watched the film, have them return to their worksheets and, in the fourth column, describe the overall effect the differences between the text and the film have on their understanding of the theme. Ask: What effects do Hoffman’s changes create? What do you think Hoffman’s purpose was in creating these changes? Do the changes enhance your understanding of the theme or hinder it? Do these changes “work”? Why or why not?

6. As a class or in small groups, have students share their findings and interpretations.

Here are some differences from the text to watch for in the film:

- The action is set in Monte Athena, Italy, during the late-nineteenth-century Victorian era rather than sixteenth-century Athens, Greece.

- Bicycles are used by the characters to escape and serve as a symbol of youth and progress in the movie. Fog appears from the bike as Robin/Puck leaves at the end of the play.

- Bottom is wearing a crown Titania gives him when he wakes from his dream.

Have students write a review of the movie. Have students focus their essay on whether Hoffman was successful or not in expressing the themes in the play with his choices by discussing two or three changes Hoffman made and analyzing their effects. 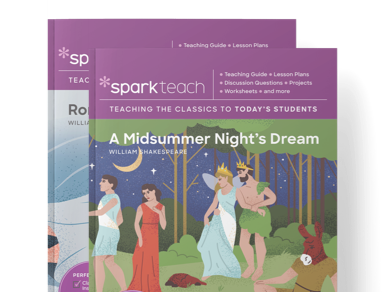