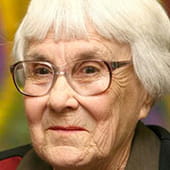 Nelle Harper Lee was born in 1926 in Monroeville, Alabama, a small Southern town very similar to Maycomb, Alabama, where her two novels, To Kill a Mockingbird and Go Set a Watchman, are set. Like Atticus Finch, the father of Jean Louise “Scout” Finch, the narrator and protagonist of both novels, Lee’s father was a lawyer. Among Lee’s childhood friends was the future novelist and essayist Truman Capote, from whom she drew inspiration for the character Dill in To Kill a Mockingbird.

Critical response to To Kill a Mockingbird was mixed: a number of critics found the narrative voice of a nine-year-old girl unconvincing and called the novel overly moralistic. Nevertheless, in the racially charged atmosphere of the early 1960s, the book became an enormous popular success, winning the Pulitzer Prize in 1961 and selling over fifteen million copies. Two years after the book’s publication, an Academy Award–winning film version of the novel, starring Gregory Peck as Atticus Finch, was produced. Meanwhile, the author herself had retreated from the public eye: she avoided interviews, declined to write the screenplay for the film version, and published only a few short pieces after 1961.

After To Kill a Mockingbird, Lee didn’t publish any other novels, didn’t work on the screenplay for the film, and retreated from the public eye, eventually returning to Monroeville. Because Lee had been so reclusive, and because her literary output was incredibly celebrated but extremely limited, the discovery of Go Set a Watchman, and its publication in 2015, was an enormous literary event.

But controversy plagued nearly every step of the publication of Go Set a Watchman. In November 2014, Harper Lee’s sister and longtime caretaker passed away. A few months later, Harper Lee’s publishers announced that they was planning to release a novel that Lee had completed in the mid-1950s, before she wrote To Kill a Mockingbird. Although Lee’s lawyer claimed that she found the manuscript shortly after Lee’s sister died, the manuscript had actually been discovered in 2011. Lee died in Monroeville in 2016.

Real courage is when you know you're licked before you begin, but you begin anyway and see it through no matter what.

You never really understand a person until you consider things from his point of view.

Until I feared I would lose it, I never loved to read. One does not love breathing.

I think there's just one kind of folks. Folks.

Shoot all the bluejays you want, if you can hit 'em, but remember it's a sin to kill a mockingbird.

It was times like these when I thought my father, who hated guns and had never been to any wars, was the bravest man who ever lived.

To Kill a Mockingbird
1961
Buy on BN.com