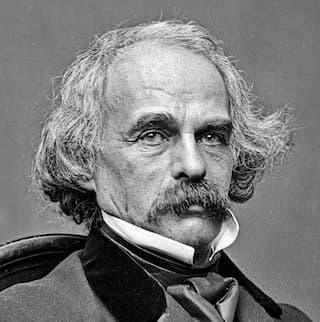 Nathaniel Hawthorne was born in Salem, Massachusetts, in 1804. His family descended from the earliest settlers of the Massachusetts Bay Colony; among his forebears was John Hathorne (Hawthorne added the “w” to his name when he began to write), one of the judges at the 1692 Salem witch trials. Throughout his life, Hawthorne was both fascinated and disturbed by his kinship with John Hathorne. Raised by a widowed mother, Hawthorne attended Bowdoin College in Maine, where he met two people who were to have great impact upon his life: Henry Wadsworth Longfellow, who would later become a famous poet, and Franklin Pierce, who would later become president of the United States.

After college, Hawthorne tried his hand at writing, producing historical sketches and an anonymous novel, Fanshawe, that detailed his college days. Hawthorne also held positions as an editor and as a customs surveyor during this period. His growing relationship with the intellectual circle that included Ralph Waldo Emerson and Margaret Fuller led him to abandon his customs post for the utopian experiment at Brook Farm, a commune designed to promote economic self-sufficiency and transcendentalist principles. Transcendentalism was a religious and philosophical movement of the early nineteenth century that was dedicated to the belief that divinity manifests itself everywhere, particularly in the natural world. It also advocated a personalized, direct relationship with the divine in place of formalized, structured religion.

After marrying fellow transcendentalist Sophia Peabody in 1842, Hawthorne left Brook Farm and moved into the Old Manse, a home in Concord where Emerson had once lived. In 1846 he published Mosses from an Old Manse, a collection of essays and stories, many of which are about early America. Mosses from an Old Manse earned Hawthorne the attention of the literary establishment because America was trying to establish a cultural independence to complement its political independence, and Hawthorne’s collection of stories displayed both a stylistic freshness and an interest in American subject matter. Herman Melville, among others, hailed Hawthorne as the “American Shakespeare.”

In 1845 Hawthorne again went to work as a customs surveyor, this time at a post in Salem. In 1850, after having lost the job, he published The Scarlet Letter, which enjoyed critical acclaim and became an instant commercial success. The House of the Seven Gables appeared the following year and fared even better—its initial sales exceeded even those of The Scarlet Letter. Ultimately, however, The House of the Seven Gables proved less popular with both readers and critics. Nonetheless, the two books together made Hawthorne a wealthy man. In 1853, Hawthorne’s college friend Franklin Pierce, for whom he had written a campaign biography and who had since become president, appointed Hawthorne a United States consul. The writer spent the next six years in Europe. He died in 1864, a few years after returning to America.

The House of the Seven Gables

Happiness is as a butterfly which, when pursued, is always beyond our grasp, but which if you will sit down quietly, may alight upon you.

Time flies over us, but leaves its shadow behind.

The only sensible ends of literature are, first, the pleasurable toil of writing; second, the gratification of one's family and friends; and lastly, the solid cash.

Every individual has a place to fill in the world, and is important, in some respect, whether he chooses to be so or not.

A pure hand needs no glove to cover it.

Life is made up of marble and mud.

What other dungeon is so dark as one's own heart! What jailer so inexorable as one's self!

The House of the Seven Gables

The Marble Faun: Or, The Romance of Monte Beni

Mosses from an Old Manse

A Wonder-Book for Girls and Boys

The Snow-Image, and Other Twice-Told Tales