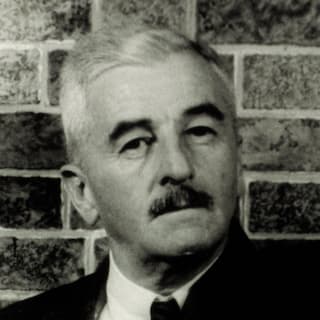 William Faulkner was born in 1897 to a prominent family in New Albany, Mississippi. A number of his ancestors were involved in the Mexican-American War, the Civil War, and the Reconstruction. Several played a in the local railroad industry and political scene. Faulkner showed signs of artistic talent from a young age, but he became bored with his studies and never finished high school.

Faulkner grew up in the town of Oxford, Mississippi, and eventually returned there in his later years and purchased his famous estate, Rowan Oak. Oxford and the surrounding area were Faulkner’s inspiration for the fictional Yoknapatawpha County and its town of Jefferson. These locales became the setting for a number of his works, including The Sound and the Fury (1929), As I Lay Dying (1930), Light in August (1932), Absalom, Absalom! (1936), The Hamlet (1940), and Go Down, Moses (1942).

Faulkner was particularly interested in the decline of the Deep South after the Civil War. Many of his novels explore the deterioration of the Southern aristocracy after the destruction of its wealth and way of life during the Civil War and Reconstruction. Faulkner populates Yoknapatawpha County with the skeletons of old mansions and the ghosts of great men, patriarchs and generals whose aristocratic families fail to live up to their historical greatness. Beneath the shadow of past grandeur, these families attempt to cling to old Southern values, codes, and myths that are corrupted and out of place in the reality of the modern world. The families in Faulkner’s novels are rife with failed sons, disgraced daughters, and smoldering resentments between whites and blacks in the aftermath of African-American slavery.

Faulkner’s reputation as one of the greatest novelists of the twentieth century is largely due to his highly experimental style. Faulkner was a pioneer in literary modernism, dramatically diverging from the forms and structures traditionally used in novels before his time. Faulkner often employs stream of consciousness narrative, discards any notion of chronological order, uses multiple narrators, shifts between the present and past tense, and tends toward impossibly long and complex sentences. Not surprisingly, these stylistic innovations make some of Faulkner’s novels incredibly challenging to the reader. However, these bold innovations paved the way for countless future writers to continue to experiment with the possibilities of the English language. For his efforts, Faulkner was awarded the Nobel Prize in Literature in 1949. He died in Mississippi in 1962.

Be scared. You can&rsquo;t help that. But don&rsquo;t be afraid. Ain&rsquo;t nothing in the woods going to hurt you unless you corner it, or it smells that you are afraid. A bear or a deer, too, has got to be scared of a coward the same as a brave man has got to be.

I decline to accept the end of man. [...] I refuse to accept this. I that man will not merely endure: he will prevail. He is immortal, not because he alone among creatures has an inexhaustible , but because he has a , a capable of and sacrifice and endurance.

If I had not existed, someone else would have written me, Hemingway, Dostoevsky, all of us.

A man is the sum of his misfortunes. One day you'd think misfortune would get tired, but then time is your misfortune.

Sin and love and fear are just sounds that people who never sinned nor loved nor feared have for what they never had and cannot have until they forget the words.

The Sound and the Fury

As I Lay Dying