Use this Real-Life Lens Lesson to help students dive deep into Shakespeare’s Romeo and Juliet and examine and engage with the play through the lens of love.

Students will identify metaphors, similes, and personification in Romeo and Juliet and explain how and why these poetic devices are used to convey complex character emotions.

Mercutio: A Character Study Through Film

Students will watch Act 3, scene 2 from three different film versions of Romeo and Juliet and compare the ways the directors depict the scene. They will consider the choices each director makes and how each decision affects the character of Mercutio.

Students will apply a helpful note-taking strategy to summarize and dissect passages from Romeo and Juliet.

Students will identify and analyze poetic devices used in key passages in the text and determine Shakespeare's purpose in using each device.

Students will use this worksheet to trace two secondary characters’ development in Romeo and Juliet and analyze their motivations.

Students will use this worksheet to explore the motif of fate and how Shakespeare foreshadows many outcomes of the play by finding and exploring several examples of foreshadowing in Romeo and Juliet.

Students will update the setting of a chosen scene from Romeo and Juliet and then write a modern version of the dialogue.

The Language of Love and Hate

Students will use this worksheet to explore words from Romeo and Juliet that are related to love and hate. They will place each word on an intensity spectrum and defend their choices.

Love and Marriage During Romeo and Juliet's Time

This handout helps students understand attitudes toward young love and marriage during the Elizabethan era and provides background information to help with comprehension of the play.

In this lesson, students will watch Act 3, scene 2 from three different film versions of Romeo and Juliet and compare the ways directors Franco Zeffirelli, Baz Luhrmann, and Carlo Carlei depict the scene. Students will carefully consider the choices each director makes and how each decision affects the story and the character of Mercutio.

Get the worksheets for this lesson (plus much more!) in the printed SparkTeach guide for Romeo and Juliet.

1. Students will identify methods used to present a character in film.

2. Students will recognize how a character may be represented in different ways.

3. Students will explain how different interpretations of a scene affect a story.

This activity is designed to be completed after students have read Act 3, scene 2 of Romeo and Juliet.

2. While reading, be sure to point out how little detail is used in the text to describe the fight scenes. Also note how important this scene is to the pacing of the story.

3. Ask students the following questions to conduct a class discussion about Mercutio’s motivations:

- Why does Mercutio decide to fight Tybalt?

- What is Mercutio’s attitude toward Tybalt before Romeo enters the scene?

- Does Mercutio’s attitude change at all during the scene? If so, how and why?

- Does Mercutio act in a credible way? Are his actions in line with what we know about his character?

- What are Mercutio’s underlying motivations for his actions in this scene?

- How do you imagine the setting and background for this scene?

4. After discussing the scene, show the three film versions of the scene.

5. After each scene is viewed, discuss the ways each director depicts Mercutio.

6. Hand out the Film Lesson Worksheet: Mercutio: A Character Study Through Film. Have students complete the chart. Give students time to discuss their worksheets in small groups, sharing ideas and getting feedback. Then introduce the comparative essay and discuss how students can use the worksheet as a planning guide for their writing.

Eliminate the essay and finish the activity with a class discussion of the three scenes. Alternatively, use only two films to complete this lesson. Note: Since the Zeffirelli film has a unique portrayal of this scene, it is suggested that this film remain as one of the two selections.

Extend the activity by putting students in small groups and asking them to come up with a directorial vision of their own for this scene. Have students present their choices for how they would film this scene in a multimedia presentation.

Buy the full Teaching Guide for Romeo and Juliet by William Shakespeare to get even more resources. 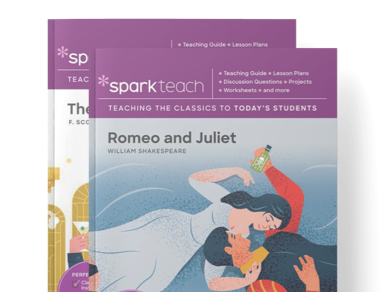