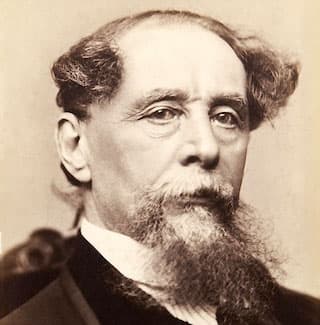 Charles Dickens was born on February 7, 1812, in Portsea, England. His parents were middle-class, but they suffered financially as a result of living beyond their means. When Dickens was twelve years old, his family’s dire straits forced him to quit school and work in a blacking factory (where shoe polish was manufactured). Within weeks, his father was put in debtor’s prison, where Dickens’s mother and siblings eventually joined him. At this point, Dickens lived on his own and continued to work at the factory for several months. The horrific conditions in the factory haunted him for the rest of his life, as did the experience of temporary orphanhood. Apparently, Dickens never forgot the day when a more senior boy in the warehouse took it upon himself to instruct Dickens in how to do his work more efficiently. For Dickens, that instruction may have represented the first step toward his full integration into the misery and tedium of working-class life. The more senior boy’s name was Bob Fagin. Dickens’s residual resentment of him reached a fevered pitch in the characterization of the villain Fagin in Oliver Twist.

After inheriting some money, Dickens’s father got out of prison and Charles returned to school. As a young adult, he worked as a law clerk and later as a journalist. His experience as a journalist kept him in close contact with the darker social conditions of the Industrial Revolution, and he grew disillusioned with the attempts of lawmakers to alleviate those conditions. A collection of semi-fictional sketches entitled Sketches by Boz earned him recognition as a writer. Dickens began to make money from his writing when he published his first novel, The Pickwick Papers, which was serialized beginning in 1836 and published in book form the following year. The Pickwick Papers, published when Dickens was only twenty-five, was hugely popular, and Dickens became a literary celebrity after its publication.

In 1836, Dickens married Catherine Hogarth, but after twenty years of marriage and ten children, he fell in love with Ellen Ternan, an actress many years his junior. Soon after, Dickens and his wife separated, ending a long series of marital difficulties. Dickens remained a prolific writer to the end of his life, and his novels—among them Great Expectations, A Tale of Two Cities, A Christmas Carol, David Copperfield (Dickens’ most autobiographical novel), and Bleak House—continued to earn critical and popular acclaim. He died of a stroke in 1870, at the age of 58, leaving The Mystery of Edwin Drood unfinished.

No one is useless in this world who lightens the burdens of another.

Reflect upon your present blessings -- of which every man has many -- not on your past misfortunes, of which all men have some.

A loving heart is the truest wisdom.

We need never be ashamed of our tears.

A wonderful fact to reflect upon, that every human creature is constituted to be that profound secret and mystery to every other.

A Tale of Two Cities

The Mystery of Edwin Drood

The Cricket on the Hearth

The Battle of Life

The Haunted Man and the Ghost’s Bargain

The LIfe of Our Lord

A Child’s History of England