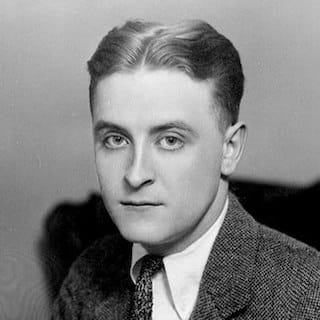 Francis Scott Key Fitzgerald was born on September 24, 1896, and named after his ancestor Francis Scott Key, the writer of “The Star-Spangled Banner.” Fitzgerald was raised in St. Paul, Minnesota. Though an intelligent child, he did poorly in school and was sent to a New Jersey boarding school in 1911. Despite being a mediocre student there, he managed to enroll at Princeton in 1913. Academic troubles and apathy plagued him throughout his time at college, and he never graduated, instead enlisting in the army in 1917, as World War I neared its end.

Fitzgerald became a second lieutenant, and was stationed at Camp Sheridan, in Montgomery, Alabama. There he met and fell in love with a wild seventeen-year-old beauty named Zelda Sayre. Zelda finally agreed to marry him, but her overpowering desire for wealth, fun, and leisure led her to delay their wedding until he could prove a success. With the publication of This Side of Paradise in 1920, Fitzgerald became a literary sensation, earning enough money and fame to convince Zelda to marry him.

Many of these events from Fitzgerald’s early life appear in his most famous novel, The Great Gatsby, published in 1925. Like Fitzgerald, Nick Carraway is a thoughtful young man from Minnesota, educated at an Ivy League school (in Nick’s case, Yale), who moves to New York after the war. Fitzgerald also shares some characteristics with The Great Gatsby’s titular character, Jay Gatsby, a sensitive young man who idolizes wealth and luxury and who falls in love with a beautiful young woman while stationed at a military camp in the South.

Fitzgerald was the most famous chronicler of 1920s America, an era that he dubbed “the Jazz Age.” The Great Gatsby is one of the greatest literary documents of this period, in which the American economy soared, bringing unprecedented levels of prosperity to the nation.

After The Great Gatsby brought him literary celebrity, Fitzgerald fell into a wild, reckless lifestyle of parties and decadence, while desperately trying to please Zelda by writing to earn money. As the giddiness of the Roaring Twenties dissolved into the bleakness of the Great Depression, however, Zelda suffered a nervous breakdown and Fitzgerald battled alcoholism, which hampered his writing. He published Tender Is the Night in 1934, and sold short stories to The Saturday Evening Post to support his lavish lifestyle. In 1937, he left for Hollywood to write screenplays, and in 1940, while working on his novel The Love of the Last Tycoon, died of a heart attack at the age of forty-four.

Show me a hero and I will write you a tragedy.

The test of a first-rate intelligence is the ability to hold two opposed ideas in the mind at the same time, and still retain the ability to function.

So we beat on, boats against the current, borne back ceaselessly into the past.

Never confuse a single defeat with a final defeat.

Everybody's youth is a dream, a form of chemical madness.

This Side of Paradise

The Beautiful and the Damned

Tender Is the Night

The Love of the Last Tycoon

The Diamond as Big as the Ritz

“The Curious Case of Benjamin Button”