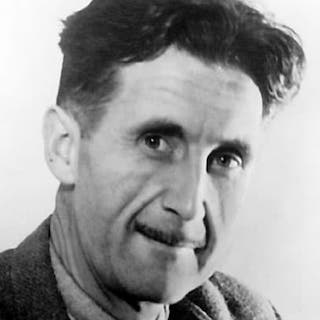 Born Eric Blair in India in 1903, George Orwell was educated as a scholarship student at prestigious boarding schools in England. Because of his background—he famously described his family as “lower-upper-middle class”—he never quite fit in, and felt oppressed and outraged by the dictatorial control that the schools he attended exercised over their students’ lives. After graduating from Eton, Orwell decided to forego college in order to work as a British Imperial Policeman in Burma. He hated his duties in Burma, where he was required to enforce the strict laws of a political regime he despised. His failing health, which troubled him throughout his life, caused him to return to England on convalescent leave. Once back in England, he quit the Imperial Police and dedicated himself to becoming a writer.

Inspired by Jack London’s 1903 book The People of the Abyss, which detailed London’s experience in the slums of London, Orwell bought ragged clothes from a second-hand store and went to live among the very poor in London. After reemerging, he published a book about this experience, entitled Down and Out in Paris and London. He later lived among destitute coal miners in northern England, an experience that caused him to give up on capitalism in favor of democratic socialism. In 1936, he traveled to Spain to report on the Spanish Civil War, where he witnessed firsthand the nightmarish atrocities committed by fascist political regimes.

Unlike many British socialists in the 1930s and 1940s, Orwell was not enamored of the Soviet Union and its policies, nor did he consider the Soviet Union a positive representation of the possibilities of socialist society. He could not turn a blind eye to the cruelties and hypocrisies of Soviet Communist Party, which had overturned the semifeudal system of the tsars only to replace it with the dictatorial reign of Joseph Stalin. Orwell became a sharp critic of both capitalism and communism, and is remembered chiefly as an advocate of freedom and a committed opponent of communist oppression. His two greatest anti-totalitarian novels—Animal Farm and 1984—form the basis of his reputation. Orwell died in 1950, only a year after completing 1984, which many consider his masterpiece.

In a time of universal deceit - telling the truth is a revolutionary act.

If you want a vision of the future, imagine a boot stamping on a human face - forever.

All the war-propaganda, all the screaming and lies and hatred, comes invariably from people who are not fighting.

War is peace. Freedom is slavery. Ignorance is strength.

Political language. . . is designed to make lies sound truthful and murder respectable, and to give an appearance of solidity to pure wind.

Coming Up for Air

Down and Out in Paris and London

The Road to Wigan Pier