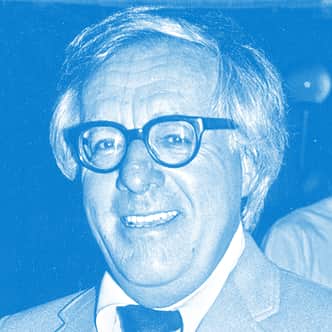 Ray Bradbury was born in Waukegan, Illinois, on August 22, 1920. By the time he was eleven, he had already begun writing his own stories on butcher paper. His family moved fairly frequently, and he graduated from a Los Angeles high school in 1938. He had no further formal education, but he studied on his own at the library and continued to write. For several years, he earned money by selling newspapers on street corners. His first published story was “Hollerbochen’s Dilemma,” which appeared in 1938 in Imagination!, a magazine for amateur writers. In 1942 he was published in Weird Tales, the legendary pulp science-fiction magazine that fostered such luminaries of the genre as H. P. Lovecraft. Bradbury honed his sci-fi sensibility writing for popular television shows, including Alfred Hitchcock Presents and The Twilight Zone. He also ventured into screenplay writing (he wrote the screenplay for John Huston’s 1953 film Moby Dick). His book The Martian Chronicles, published in 1950, established his reputation as a leading American writer of science fiction.

In the spring of 1950, while living with his family in a humble home in Venice, California, Bradbury began writing what was to become Fahrenheit 451 on pay-by-the-hour typewriters in the University of California at Los Angeles library basement. He finished the first draft, a shorter version called The Fireman, in just nine days. Following in the futuristic-dustpan tradition of George Orwell’s 1984, Fahrenheit 451 was published in 1953 and became Bradbury’s most popular and widely read work of fiction. He produced a stage version of the novel at the Studio Theatre Playhouse in Los Angeles. The seminal French New Wave director François Truffaut also made a critically acclaimed film adaptation in 1967.

Bradbury received many awards for his writing and was honored in numerous ways. Most notably, Apollo astronauts named the Dandelion Crater on the moon after his novel Dandelion Wine. In addition to his novels, screenplays, and scripts for television, Bradbury wrote two musicals, co-written two “space-age cantatas,” collaborated on an Academy Award–nominated animated short called Icarus Montgolfier Wright, and started his own television series, The Ray Bradbury Theatre. Bradbury is acknowledged as one of the masters of the science-fiction genre. Although he is recognized primarily for his ideas and sometimes denigrated for his writing style (which some find alternately dry and maudlin), Bradbury nonetheless retains his place among important literary science-fiction talents and visionaries like Jules Verne, H. P. Lovecraft, George Orwell, Arthur C. Clarke, and Philip K. Dick.

Bradbury continued to write until the end of his life. He died in 2012 in Los Angeles, after an illness.

Living at risk is jumping off the cliff and building your wings on the way down.

You don't have to burn books to destroy a culture. Just get people to stop reading them.

Jump, and you will find out how to unfold your wings as you fall.

If you hide your ignorance, no one will hit you, and you'll never learn.

Death Is a Lonely Business

A Graveyard for Lunatics

The Mummies of Guanajuato

The Golden Apples of the Sun

A Medicine for Melancholy

The Day it Rained Forever

R is for Rocket

The Machineries of Joy

S is for Space

I Sing the Body Electric

The Fog Horn & Other Stories

The Last Circus and the Electrocution

A Memory of Murder

The Parrot Who Met Papa

Quicker Than the Eye

One More for the Road

Is That You, Herb?

A Sound of Thunder and Other Stories

The Dragon Who Ate His Tail

A Pleasure to Burn