REGISTER TO VOTE! Make your voice heard on Election Day 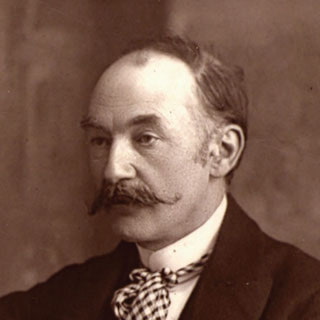 Thomas Hardy was born June 2, 1840, in Higher Bockhampton in Dorset, a rural region of southwestern England that was to become the focus of his fiction. The child of a builder, Hardy was apprenticed at the age of sixteen to John Hicks, an architect who lived in the city of Dorchester. The location would later serve as the model for Hardy’s fictional Casterbridge. Although he gave serious thought to attending university and entering the church, a struggle he would dramatize in his novel Jude the Obscure, declining religious faith and lack of money led Hardy to pursue a career in writing instead. He spent nearly a dozen years toiling in obscurity and producing unsuccessful novels and poetry. Far from the Madding Crowd, published in 1874, was the author’s first critical and financial success. Finally able to support himself as a writer, Hardy married Emma Lavinia Gifford later that year.

Although he built a reputation as a successful novelist, Hardy considered himself first and foremost a poet. To him, novels were primarily a means of earning a living. Like many of his contemporaries, he first published his novels in periodic installments in magazines or serial journals, and his work reflects the conventions of serialization. To ensure that readers would buy a serialized novel, writers often structured each installment to be something of a cliffhanger, which explained the convoluted, often incredible plots of many such Victorian novels. But Hardy cannot solely be labeled a Victorian novelist. Nor can he be categorized simply as a Modernist, in the tradition of writers like Virginia Woolf or D. H. Lawrence, who were determined to explode the conventions of nineteenth-century literature and build a new kind of novel. In many respects, Hardy was trapped in the middle ground between the nineteenth and twentieth centuries, between Victorian sensibilities and more modern ones, and between tradition and innovation.

Hardy lived and wrote in a time of difficult social change, when England was making its slow and painful transition from an old-fashioned, agricultural nation to a modern, industrial one. Businessmen and entrepreneurs, or “new money,” joined the ranks of the social elite, as some families of the ancient aristocracy, or “old money,” faded into obscurity.

Hardy was frustrated by the controversy caused by his work, and he finally abandoned novel-writing altogether following Jude the Obscure. He spent the rest of his career writing poetry. Though today he is remembered somewhat more for his novels, he was an acclaimed poet in his time and was buried in the prestigious Poet’s Corner of Westminster Abbey following his death in 1928.

To find beauty in ugliness is the province of the poet.

A lover without indiscretion is no lover at all. Circumspection and devotion are a contradiction in terms.

Love is a possible strength, in an actual weakness. Marriage transforms a distraction into a support, the power of which should be, and happily often is, in direct proportion to the degree of imbecility it supplants.

To dwellers in a wood almost every species of tree has its voice as well as its feature. At the passing of the breeze the fir-trees sob and moan no less distinctly than they rock; the holly whistles as it battles with itself; the ash hisses amid its quiverings; the beech rustles while its flat boughs rise and fall.

The Poor Man and the Lady
1867, unpublished and lost

Under the Greenwood Tree: A Rural Painting of the Dutch School
1872

Far from the Madding Crowd
1874

The Mayor of Casterbridge: The Life and Death of a Man of Character
1886

Tess of the d'Urbervilles: A Pure Woman Faithfully Presented
1891

The Well-Beloved: A Sketch of a Temperament
1897

The Hand of Ethelberta: A Comedy in Chapters
1876

Wessex Poems and Other Verses
1898

Poems of the Past and the Present
1901

Time's Laughingstocks and Other Verses
1909

Late Lyrics and Earlier with Many Other Verses
1922