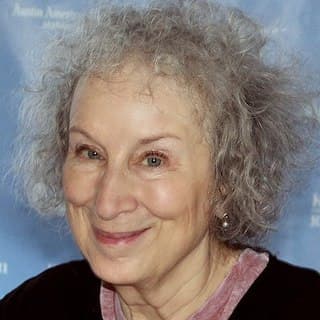 Margaret Atwood was born on November 18, 1939, in Ottawa, Ontario, to parents of Nova Scotian origin. When she was seven, her family moved to Toronto but continued to spend the warmer months in the remote northern areas of Ontario and Quebec, where her father, an entomologist and zoology professor, studied tree-eating insects. Atwood’s fascination with the Canadian wilderness, which is present in so much of her writing, dates from this period. She was eleven before she attended school on a full-time basis.

She received her bachelor’s degree from Victoria College, part of the University of Toronto, in 1961. Upon the recommendation of her mentor, Northrop Frye, she decided to pursue a graduate degree at Radcliffe College, which joined Harvard University while Atwood was studying there. At that time, Harvard was starchy and ultraconservative, and Atwood’s experiences as a graduate student helped shape her feminist views and opposition to the Americanization of Canadian culture. In 1962, she earned her master’s degree, and although she stayed at Harvard intermittently over the next several years, she left the program before completing her Ph.D. By 1967, she was already becoming famous as a writer.

While studying in Boston, she published her first collection of poetry, The Circle Game (1966), which was awarded the prestigious Governor General’s Award. In 1969, she published her first novel, The Edible Woman, an edgy satire about a young woman working at a marketing firm. Over the next few years, she continued to alternate between poetry and prose, often publishing one work in each genre in the same year. In 1972, she published a critical work called Survival: A Thematic Guide to Canadian Literature, which greatly influenced the ways Canadians understand their literary traditions. Still taught in many Canadian schools, Survival advanced an environmental interpretation of Canadian literature and portrayed Canadian writers as victims still imprisoned by a colonial dependency—caught between America to the south and the vast wildernesses to the north. That same year, Atwood published her second novel, Surfacing, in which the protagonist must escape to the northern wilderness before rejoining society.

After two broken-off engagements and a five-year marriage to an American, Jim Polk, Atwood settled down with the Canadian writer Graeme Gibson in 1973. After several years of being professionally involved with the Toronto-based publishing house, House of Anansi Press, as well as intermittent teaching engagements, she and Gibson bought a farmhouse outside Alliston, Ontario, where they lived off and on for many years. In 1976, the year she published her third novel, Lady Oracle, Atwood gave birth to a daughter, Jess Atwood Gibson. Over the next few years, she dabbled in television screenwriting; produced a history book, Days of the Rebels: 1815–1840 (1977); and published a collection of short stories, Dancing Girls (1977).

Following more or less temporary residencies in Vancouver, Edmonton, Montreal, Berlin, Edinburgh, London, and the south of France, Atwood and her family settled in Toronto on a permanent basis in 1981. The previous year, Atwood had become vice-chairperson of the Writers’ Union of Canada, a position perfectly suited to her interest in Canadian nationalism, which her years in the United States, as well as her commitment to publish Canadian writers through Anansi, had strengthened. Atwood explored the theme of Canadian identity, with varying levels of explicitness, in many of her works. Committed to forging a “Canadian literature,” Atwood has cited fellow Canadian poets of her generation, including Michael Ondaatje and Al Purdy, as the strongest influences on her poetry. More than twenty years after publishing Survival, Atwood expanded on this subject in Strange Things: The Malevolent North in Canadian Literature (1995).

Internationally, Atwood is celebrated for the blunt feminism of her books. From her first novel, The Edible Woman, to her dystopian masterpiece, The Handmaid’s Tale (1985), the book that sealed her international fame, Atwood has shown a tremendous interest in the restraints society puts on women—and the facades women adopt in response. The Handmaid’s Tale, which Atwood refuses to label as “science fiction,” depicts a society in which women are shorn of all rights except the rights to marry, keep house, and reproduce. After The Handmaid’s Tale made Atwood a major international celebrity, she wrote a series of novels dealing with women’s relationships with one another, including Cat’s Eye (1988) and The Robber Bride (1993). In 1992, she published Good Bones, short, witty pieces about female body parts and the constraints that have been placed on them throughout history. Atwood explores women’s historical roles in other works, including her renowned poetry collection, The Journals of Susanna Moodie (1970) and her novel Alias Grace (1996). Both re-imagine the lives of famous pioneer women in Canadian history.

Today, Atwood is one of the best-known living writers in the world. Atwood’s work has been published in more than twenty-five countries, and she has received a number of prestigious awards for her writing, including the Booker Prize, a Guggenheim Fellowship, a Molson Award, and a Canada Short Fiction Award.

The Eskimo has fifty-two names for snow because it is important to them; there ought to be as many for love.

I would rather dance as a ballerina, though faultily, than as a flawless clown.

All stories are about wolves. All worth repeating, that is. Anything else is sentimental drivel.

The Year of the Flood

Murder in the Dark

Morning in the Burned House